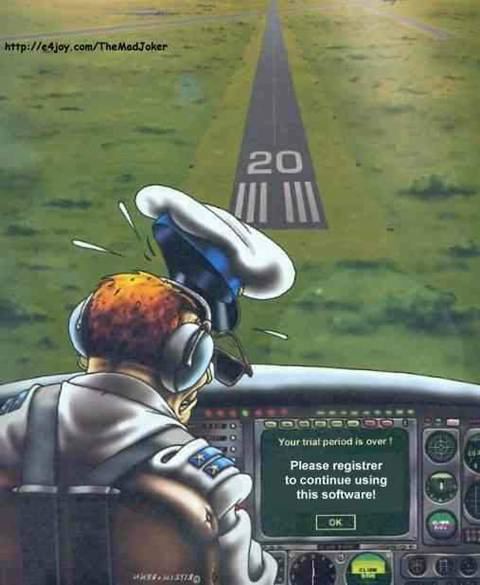 Several people have contacted me as of late about the Egyptian airlines 767 crash. Why me? Because I used to work for Boeing, so I have some knowlege about airplanes: how they work, what goes wrong. I got laid off from Boeing, so I am not beholden to them, and I am still mad at them. This would be a golden opportunity to trash Boeing's reputation, and talk about all that doesn't work, and why, and how Boeing management frivilously bought McDonnel Douglas instead of focussing on the design and construction of airplanes.

I will not do that. Instead, I want to discuss the facts of the crash, the truth about air travel, and the fear of flying.

The facts, Ma'am, just the facts

Some objective truths about airplane travel:

An "objective truth" is an assertion that can be supported either by direct observation or by inference from statistics.

You are safer on board a commercial airplane than any other form of travel ever devised, with the exception of elevators. This is a consequence of how air travel evolved. Travel by ship evolved over thousands of years, and ship travel has always had risks of storm and tide. Consequently, sailors always had a fatalistic attitude towards their craft. Also, ship owners have been notoriously cheap, hiring lowly people and treating them poorly. Consequently, the people associated with ships have had a short range focus, never really seeing the bigger picture. Consider, for example, the Exxon Valdez disaster. The captain of the ship was drunk. This is an unthinkable occurance for commercial flight. The culture is different.

The number of people killed flying in commercial airplanes world wide is two orders of magnitude smaller than the number of people killed in the United States in automobile accidents. We could effect a serious reduction in death due to automobile accidents if we simply shot people after their second DWI conviction. We don't do that, because drinking and driving are still socially acceptable. Also, under Jewish law, you can't execute somebody until they actually kill somebody, and the Rabbis came up with all kinds of legal and procedural dodges to avoid executing anybody. So shooting drunkards probably won't happen. Israel has relatively few deaths due to drunk driving, but Israeli drivers kill one another quite readily while cold sober.

There are a lot of features on modern aircraft that make them intrisically safe. Your car has redundant brakes (that's what a dual braking system is). Aircraft have all kinds of redundancies, and these are just the redundancies I am aware of:

There are other factors that make airplane travel intrinisically safe:

But these are the words of an engineer, and they aren't convincing. At least, I have never convinced anybody. Why? Because you can't combat emotions with logic. So let us consider the emotion of fear of flying.

Why people are afraid of flying

People smoke cigarrettes. They ride bicycles without helmets. They drink and drive (and kill far more people than airplanes do). The climb mountains. They have extramarital affairs (and endanger themselves and their spouses). They buy Sport Utility Vehicles and endanger everybody around them with their noxious exhaust and their gross vehicle weights. So people willingly engage in risky activity and it doesn't faze them. What is different about airplane travel?

In fact, it is natural to fear flying. The solution to the problem is not to deny the fear, but to acknowlege it, experience it, savor the fear and then be brave and do the thing you are afraid of. Fear is important - it protects us from our own stupidity. But while we should allow fear to guide us, we should not allow fear to control us. Because while Fear protects us, Fear also leads to the evils of indifference, racism, and paralysis.

I do not think of myself as a reckless man. I am married with children, and I have a good job and a bright future. I ride a bike, true, but I am fanatical about wearing a helmet, gloves, and thick, bright colored clothing. I have lights front and rear, and I carry redundant batteries and a spare light bulb. I have mastered the art of bicycle repair, but I still take the bike in once a year for a stem-to-deraileur checkup by real professions. I even carry a modest first aid kit. So while I am engaged in a risky activity, I am still careful.

I am planning on flying to Israel in the spring with my Rabbi, Jonathan Singer. Rabbi Singer is a brilliant man, a good friend, and also a husband and a father. His wife, Rabbi Beth Singer, is a brilliant woman, is also my friend, and a wife and a mother - could I possibly leave her a widow? Far be it from me to do such a thing! I would not dream of advocating any course of action that would put either of us at risk. So this is no academic discussion. I am putting my life on the line for a system of belief. If I am right, I am going to have a good time, and learn a great deal.

Travel to far off places promotes prosperity, and prosperity promotes peace. We Jews are commanded over and over again to pursue peace. Our history is full of examples of Jewish heroes who have taken grave risks to promote peace. Yitzhak Rabin, of blessed memory, is only the most recent example. Therefore, I think we should be brave, and go.

There are some things you can do prior to flying which will reduce your anxiety.

Return to the home page.